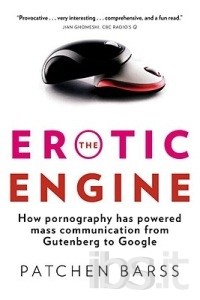 Il saggio di Patchen Barss individua nella pornografia uno dei principali vettori dell'innovazione comunicativa. Sarebbe la ricerca del sesso a velocizzare innovazioni epocali come la stampa, il commercio elettronico, le comunicazioni digitali.
A nostro parere ha proprio ragione.
Pornography: The force for change that has been written out of the history of world culture.
From cave painting to photography to the internet, pornography has always been at the cutting edge in adopting and exploiting new developments in mass communication. And in so doing, it has helped to promote and propel those developments in ways that are rarely acknowledged. Without pornography, the internet would not have grown so quickly. The e-commerce payment systems that are now commonplace would be at a far more primitive stage security and usability. Without video streaming software developed for pornography sites, CNN would be struggling to deliver news clips. Without advertising from sex sites, Google could not have afforded YouTube.
This smart, witty and well-researched history shows how a vast secret trade has bankrolled and shaped mainstream culture and its machines.

"From the Hardcover edition."